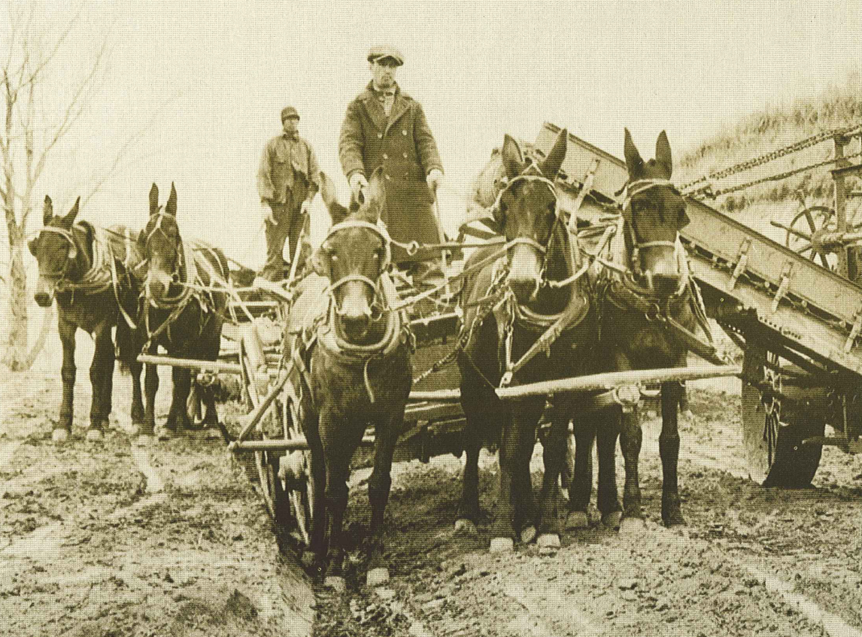 When Francis Evans Hubbard got his start in the roadway construction industry exactly one century ago, his entire equipment fleet consisted of little more than a box wagon and a pair of rugged work mules. That simple rig was enough to secure a contract with the Southern Paving Company, hauling sand and other road materials to resurfacing projects in the area. Their success convinced Hubbard that the mules were of greater value on a construction site than on his family farm, and in 1920 he went into business for himself full-time, forming the organization that would become Florida’s leading civil construction contractor.

In the decade that followed, Hubbard’s mule fleet grew in numbers as his contracting business expanded throughout the state. Although destined to be replaced by the mechanized equipment that was still being developed at the time, the animals—and the workers who drove them, known within the industry as “Muleskinners”—occupy an essential place in Hubbard Construction Company’s history. During his earliest years in business, from 1920 to 1924, Hubbard employed between three and a dozen workers, as projects demanded. Most, if not all of them, were muleskinners. These were professional mule drivers, whose job it was to keep the mules hauling materials to and from jobsites. The term “skinner” was common slang during the time for someone who could “skin,” or outsmart, the mules into behaving in the way that was needed. This was something of a skilled position, given the characteristically stubborn nature of the mules.

Besides intelligence and cunning, the muleskinners of Hubbard’s day required a familiarity and even trust with their animals to successfully perform their jobs. The muleskinner drove the same pair of mules each day. Those mules were his team, and like all team members, each mule was given a name. This way neither the mules nor the skinners ever got confused about who was leading who. DO YOU KNOW NED?

One of Francis Evans Hubbard’s first mules was not actually a mule at all, but his wife’s horse, Ned. Mildred Hubbard had owned Ned since before marrying her husband, and had rode about town in a buggy pulled by the beloved animal. When Hubbard secured his first material delivery contract, Ned was recruited to join the team. The horse worked alongside Hubbard’s mules, hauling sand and pulling equipment.

Years later, when Francis’ son and heir to Hubbard Construction Company, Frank Hubbard, was growing up, he was allowed to give names to some of the mules as a reward for completing his chores. Some notable examples include “Doug” and “Igou,” both of which were kept by Hubbard until the sale of the mules in 1932.

The rapport between the skinner and his team of mules has its roots at least as far back as World War I, during which mules were used to transport military supplies to the battlefield. As a veteran of the Great War, Francis Hubbard likely utilized the animals in Europe, before forming his construction company following his return home from duty. Although no longer standard in the construction industry in 1939, mules were still used by the US military when Hubbard re-enlisted to once again fight in Europe in World War II, notably as transport for howitzers and other heavy artillery.

In the mid-1920s, Hubbard expanded his services to include grading operations, which meant growing his workforce of muleskinners. At its peak, Hubbard owned and ran 75 mules. They operated in teams of two and three, with a team of two mules pulling a “wheeler” or scoop pan, and teams of three used to pull hooks. For larger equipment, like Hubbard’s drag pan called a “fresno,” a three-team hitch was required. The wheeler and hook teams worked in tandem, dragging their rig equipment over the ground to collect dirt, then transporting it to the site where it was unloaded. As with today’s operations, the process required efficiency, skill, and strong communication among team members.

The mule-drawn equipment used by Hubbard and other contractors during the 1920s was the predecessor to today’s motor graders. Hubbard was considered “progressive” within the roadway construction industry when, in 1932, he sold his entire fleet of mules in one sale and transitioned to using tractors, ball wagons, and other mechanized equipment. The decision was in fact progressive, given that the mules were purchased by a competitor in the industry.

Today’s skinners aren’t mule drivers, strictly speaking. But the men and women of Hubbard Construction Company who operate heavy machinery share a direct lineage with those who drove mule teams 100 years ago. They too rely on highly specialized skills, knowledge of their equipment, and intelligence to successfully perform their jobs. Hubbard is proud to celebrate and uphold its heritage dating back one century ago, and to continue to forging our path in the spirit of our founder.